A Dangerous Madness
by Michelle Diener 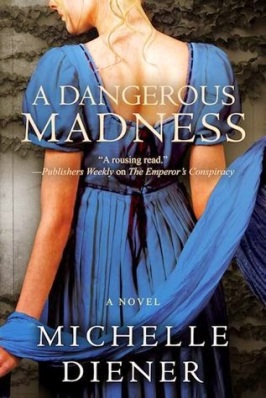 I received an ARC of this book from the Publisher, via Netgalley, in exchange for an honest review.

The Duke of Wittaker has been living a lie…
He’s been spying on the dissolute, discontented noblemen of the ton, pretending to share their views. Now he’s ready to step out of the shadows and start living a real life…but when the prime minister of England is assassinated, he’s asked to go back to being the rake-hell duke everyone believes he still is to find out more.
Miss Phoebe Hillier has been living a lie, too…
All her life she’s played by society’s rules, hiding her fierce intelligence and love of life behind a docile and decorous mask. All it’s gotten her is jilted by her betrothed, a man she thought a fool, though a harmless one. But when she discovers her former fiancé was involved in the plot against the prime minister, and that he’s been murdered, she realizes he wasn’t so harmless after all.
And now the killers have set their sights on her…
The only man who can help her is the Duke of Wittaker–a man she knows she shouldn’t trust. And she soon realizes he’s hiding behind a mask as careful as her own. As the clock ticks down to the assassin’s trial, the pair scramble to uncover the real conspiracy behind the prime minister’s death. And as the pressure and the danger mounts, Phoebe and Wittaker shed their disguises, layer by layer, to discover something more precious than either imagined–something that could last forever. Unless the conspirators desperate to hide their tracks get to them first.


When a heroine in the 1800’s is jilted and all she feels is relief, despite the prospect of social ruin, you know you have the start for an interesting heroine. Phoebe and James both start their relationship as a bit of a chess game, each testing the others defenses and neither wanting to give too much away too soon until the danger Phoebe is in draws them both closer together.

Historically, the assassination of Prime Minister Spencer Perceval by John Bellingham actually did occur, as did a few of the other tidbits about him and other characters scattered throughout. However, a large dose of literary license was taken for this story, as is the case for many of the “historical” accounts since so little is truly know about Mr. Bellingham.

I really enjoyed how Ms. Diener weaved history with historical romantic suspense and mystery, but make no mistake this is more historical fiction than it is historical romance. In addition, at the end of the book, Diener provides a fascinating peek into the realities of the history and what she used and why, to provide the framework for her fiction. This was no easily guessed mystery and the reader was left to figure out the clues along with the hero and heroine rather than gaining extra insight from the minds and actions of the villains. I also enjoyed how the understanding of the characters and the romance slowly unfolded through the story. Their relationship didn’t really take center stage until about halfway through the story and it felt natural and gradual. The mentions of the other characters and couples was also very natural so it didn’t just hit you over the head with the fact that there are previous books to this series. There are in fact two previous books in Diener’s Regency London series, but their mentions in this story merely enticed one to go back and read the previous books rather than leaving one lost in the current plot, so A Dangerous Madness works very well as a standalone.

The romantic part, despite the unusual nature of their connection and Phoebe’s blatant disregard for the social conventions of the time, was refreshingly restrained. Except for the violence, you could almost rate the book G if you were comparing to movie ratings.

This is very different from most of the books I’ve read recently, but in a good way. I am rating this 4 stars and will be looking to pick up the next books in the series.

2 thoughts on “Review- A Dangerous Madness”