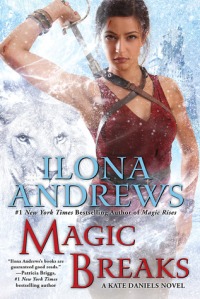 Book 7 of the Kate Daniels series is finally here and I can’t believe I have a whole year at least to till the next one (fortunately a Dali and Jim story is coming at the end of November).

First things first, I re-read this book twice before feeling able to write this review. If you are a longtime fan of this series, you are likely to either love it or hate it. If you are not a longtime fan of this series, despite the handy intro to all things Kate Daniels at the front, don’t start here, it won’t be worth your time, the ride to finding out everything is what is important-not the culmination. And if you haven’t read this book already, just stop now, this book is highly polarizing and honestly, why on earth should my opinions matter to you?

Now that I have that out of the way, excuse me while I squee. I adore this book, this series, and these authors. YES, I adored this book (no, it won’t hurt my feelings that people think I am fan-girling). Did I love everything about it? No, particularly the Mauro thing, but I don’t expect things to always be happy and sunshiny roses with unicorn rainbows. But this book was so much the culmination of Kate’s personal growth, the culmination of her relationships with people, and their relationships with her, that I could not help but love it. I keep reading reviews where people are irked about Kate supposedly acting out of character, and I suppose if you compare her to how she was presented in Magic Bites, you would be right. But here’s the thing, she has grown and changed, and so have the people around her, and I can’t help thinking how inexpressibly boring this series would be if we were still dealing just with bad assed merc Kate. Traitors, allies, and frenemies are revealed, lives are changed, and YES Roland, and (yuck) Hugh. Turns out the world is a whole lot stranger than Kate (or us readers) ever thought. And to me the ending totally makes up for Curran’s BS in the last book (YMMV). The other things I tend to see people complain about are deus ex machina and plot devices and that things weren’t done creatively enough (often from the same reviewer). So, in my opinion, yes, some things were unavoidably twisty, and yes, you saw some things coming a mile a way, but it felt like a fairly good balance between making things creative and unique and avoiding the plot device of having everything be a surprise JUST for the audience gasps. Sometimes a spade is just a spade. There were things that were a bit more exciting and emotional than I expected, and things that hit a lower note than I expected, but putting it all together it felt like exactly the story we have been leading up to, even when it wasn’t precisely what I was expecting.

And if you want some spoilers straight from Ilona’s words, read here.