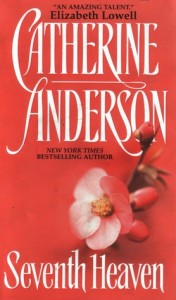 This particular book caught my eye because I remember it being an incredibly sweet and romantic second chance love story, but edgy too because it was either the first, or one of the first books I ever read about a rape survivor. I remembered thinking that it was remarkably well done, and I was curious to see if this book held up to my memories of it.

What we have here is two best friends from childhood who became high school sweethearts, then are ripped apart by tragedy in college, and are meeting again 10 years later after a whole lot of rough life for both of them. Joe Lakota is a dominant former pro-football player with a small child named Zachary. Zachary is a plot moppet, but he’s fairly integral to the story, and reasonably cute. Marilee is a neurotic mess, but all things considered, she has every right to be. Some of what she did and did not do doesn’t make sense till more than a third of the way into the book so in reviews I saw quite a few DNF’s based on that, but, her reasoning eventually does make sense if you get through it.

So how does it stack up against my memories? Not quite as well as I had hoped. Joe did some pretty bone headed things and while he usually caught on, at least in his head, he never truly expressed that to Marilee. It is still mostly sweet and romantic, but there are ways and places that Joe pushed, that I was just not entirely comfortable with. But he never really pushed the sex angle either, so it was at least acceptable. Altogether, for a book published in 2000, I am still fairly happy with how the treatment of a rape survivor with PTSD was handled. No magic smexing magically made her all better, and Marilee’s panic felt very real to me.

I am not quite sure whether or not to recommend this book. I still liked it, but I can see where some people are going to be put off with various aspects of it. basically though, if the events described in the book aren’t triggering to you (and they are fairly graphic), and you like or want a bit more realism in your contemporary, then this might still be a good choice.