Burn for Me
by Ilona Andrews 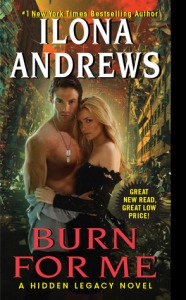 Ilona Andrews, the husband and wife writing team of the Kate Daniels Series and The Edge Series, and just all around awesome couple who seriously interact with their fans on their blog and who do free serial writing projects (really check out their blog) have started a new series, Hidden Legacy.

The Hidden Legacy series is in a divergent world where in 1863 we discover a serum that unlocks untapped magic potential. Shenanigans ensue and the world decides this is much too dangerous to be let loose. Of course, there are all the people who have already had the serum, and these traits are passed down genetically to their offspring, so magic, and thus power, prestige, and money are concentrated into the hands of these families, known as Houses.

Nevada Baylor, so far as the world is concerned, is magically a null. She owns an investigation service that is mortgaged to a powerful House, and has a host of responsibilities from her family and the business. When a deranged pyrotechnic starts a series of crimes, and his family wants him peaceably captured, Nevada is conscripted, because her chief qualification is she’s expendable. If only they knew she is an extremely powerful human lie detector, it would be so much worse.

Connor Rogan, also known as Mad Rogan, is the most powerful telekinetic known. He’s a former soldier and something of a sociopath. But when his cousin who he hasn’t contacted in a decade comes to him for help in getting her son who has been pulled into the plot into custody rather than dead, he decides to become involved.

Naturally this sets Nevada and Mad Rogan onto a collision course. I have to say, I did not like the way they met. Mad Rogan was in my opinion reprehensible, and his future behavior didn’t endear me to him as we went along. I am typically cool with morally ambivalent and even to an extent, sociopathic ones, but Rogan really kind of irked me. And it didn’t help that the POV was completely from Nevada’s side, nor that Nevada started out displaying TSTL heroine characteristics with an overwhelmingly unsuitable hero and in the most inappropriate moments.  But, as the story progressed and they were in dangerous situation after dangerous situation where Rogan kind of shined, and where Nevada stuck to her guns about not going after what she wanted when it wasn’t good for her, well I started to see it better. Then Nevada gave us a bit of insight to how Rogan looked to someone with such an unusual magical ability.

“Mad Rogan, unlike other people, rarely lied. I didn’t know if it was because I would call him on it or if it was simply his way. When he said he would kill you, he meant it. He didn’t make threats or promises, he stated facts, and when he wanted something, he’d do whatever he had to do to get it”

That, to me, really seemed to make it make sense. I mean, how seductive would it be to a human lie detector to be around someone who didn’t lie to her?

When we hit the last chapter and I saw how much stronger Nevada was than she thought (it seriously closed the power differential between her and Rogan), and how she kept up her distance for the most part, despite her attraction and him pushing, I was ready to give it 3.5 stars or so and be cautiously optimistic about the rest of the series. Then, OH MY EFFING GOD, we got to the epilogue. There was a hellacious twist that I never saw coming and we finally got into Rogan’s head. It immediately bumped up to 4.5 stars for me and I am extremely excited about the next book in the series. I can’t wait to see how Rogan unfolds. Do I forgive him right now? Nope, but he’s got all kinds of room for growth and interesting stuff.