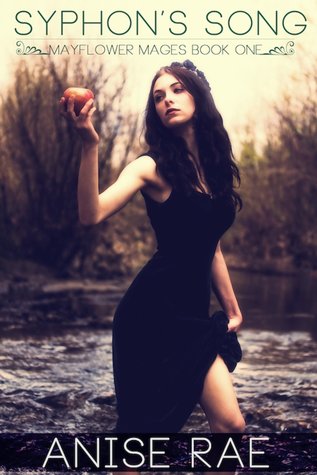 This book is the first in the Mayflower Mages series. I picked it up because the second book was too tempting not to snatch up on Netgalley (that review will be coming up in the next couple of weeks), and I just can’t start in the middle of a series.

Let’s start with the fact that I am thrilled with this book, I enjoyed it very much. I just can’t see how to write this review without making it sound like I didn’t like it. And that is for very good reason, because what it most reminded me of is Ilona Andrews, and particularly her new series first, Burn For Me. That is very high praise from me, because I adore Ilona Andrews, but of course I cannot help comparing it – and it falls just a tad bit short of that for me. But, others may really like this book better for the very reasons that it didn’t quite hit all my buttons.

This is an alternate US history where magic and magical ruling families control the world. Magic is passed on genetically and the people who came on the Mayflower ships were mages. There’s some interesting world building going on, and Ms. Rae avoids the info-dumping issue mostly with aplomb, though there are a few places that did leave me scratching my head for a bit until I sorted out the rules. The main focus however is not so much the world building, but the characters and their romance. Bronte Casteel is a Syphon Mage, which in her world is a death sentence since it is assumed that Syphon’s can suck all the magic out of other Mages. So, she lives as one of the downtrodden nons, thrown away from her powerful family. Colonel Vincent Rallis is her hereditary enemy, but a chance meeting when they were teens sets them apart and sets up the situation to bring them back together as adults. Their meeting was what prompted her family to send her away, and was something that gave him both hope and an academic interest to balance his dangerous military career. He’s a powerful mage with a gift that could destroy him, she’s an apparently powerless Syphon with the ability to suck out his magic, but it turns out that is only his magic, and for him that is completely not a bad thing. By all the rules of Romancelandia, obviously these two are meant for one another.

So what did I think? This series is going to be set up as a series of potentially stand-alone books, each featuring a different couple, and it looks like each focusing on a different unfair law or situation in their world. Since their entire relationship has to be crammed into one book, there isn’t quite the character exploration and building that I would have liked to have seen. They are insta-mates from the start, but it worked for me in the context of the world they are in, and he is much more dependent and bonded to her than she is to him, so sexist as that may seem, it worked better for me than it does when the reverse is true. And overall, I liked them as characters and for each other. So, since the only thing I can do is compare this to Burn For Me, here goes. While the world premise is just as compelling, and the supporting cast of family are just as quirky and fun, it just doesn’t have the character depth and tension that I got from BFM, and the plotting and pacing had some rough spots and it just didn’t go as smoothly as I would have hoped. It felt a bit rushed trying to cram so much into one book. However, while Vincent has some rough spots and isn’t above a little manipulation, he was nowhere near the Alpha-hole as Mad Rogan was, so there was, in my opinion, much less to have to work through. There’s also a heck of a twist in this book too, though it is happier than the one in BFM. Selene Glendor is a helluva interesting character and I can hardly wait for her book. So, yeah, it sounds like I didn’t like it, but I really did. I think of it as a softer and more romantic Burn for Me. And for those who were disappointed by BFM, or put off from it, because there wasn’t enough romance or because of what Mad Rogan did, but were otherwise interested, you will probably enjoy the heck out of this book.