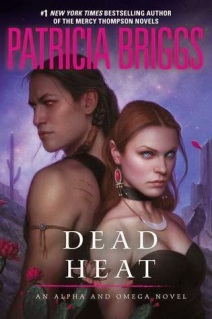 (P.S. I am going to try adding covers again and see if I can keep them without breaking them now)

Patricia Briggs is one of my auto buy authors. I adore her Mercyverse, which includes the Alpha & Omega series. Some people suggest that you don’t really need to read the Mercy Thompson series in order to understand or read the Alpha & Omega series, but I am going to have to politely disagree. Events that happen in each series influence and inform the events of the other series. This is the 4th story in the Alpha & omega series, and there are 8 stories in the Mercy Thompson series. In my opinion, you need all those stories, and you need to read them in order. But, at the least you will need to read the preceding Alpha & omega books before reading this one.

Up until this point, I would have said that the Mercy Thompson series was the Urban Fantasy branch, and the Alpha & Omega series was the Paranormal Romance branch. Dead Heat tends to move away from a stricter paranormal romance sensibility and more into an urban fantasy one, and despite my die hard romance reader soul, I was not only OK with that, I was thrilled. Charles and Anna are settled, their relationship is strong, yes there is and will be friction to their relationship because of how their pasts have shaped them, it would be impossible to be otherwise. But their relationship is strong. And that was the problem I had with Fair Game, it seemed to be trying so hard to be relationship focused and romance novel centric, that in places if made them caricatures of themselves. Not to say I didn’t like Fair Game, because I did, but there were some uncomfortable moments for me, and not because of story elements, but because the character’s actions didn’t always seem to fit them. Dead Heat wasn’t like that at all. This story was positively joyous despite the threads of violence and endangerment of children. We got to see more of how Charles and Anna are as part of a larger world, one that isn’t all misery, but spans the scope of human (and werewolf) emotion and experience. Joy, love, anger, regret, fear, compassion. Yes, they focus on each other and continue and learn each other, as they should, but their relationship isn’t the only focus of their lives and their actions. And that for me is what makes it possible for a series and a couple to continue to progress. We also saw the return of Special Agent Leslie Fisher, which I appreciated for one thing because I simply like her, and for another, because just as we are seeing Charles’ relationships outside of Anna, I’d like to see Anna develop relationships outside of Charles.

Some threads that were picked up are: Anna’s wish for children and Charles’ fears, the effects of almost-immortality matched against the reality of loved ones who die, how werewolves are changed and the politics involved in that, the Fae war, and of course, good vs. evil because it wouldn’t be Patricia Briggs if we didn’t have that. This wasn’t the sexiest or most sensual book, and we didn’t get to see as much of Anna’s wolf as I would have liked (yes we saw her in werewolf form, but not really her wolf), but it kept me frantically flipping pages and completely absorbed for the entire book. It doesn’t resolve everything, which is good because that would cause the book and the series to feel static, but nothing pressing was left out.