The Dangers of Dating a Rebound Vampire
by Molly Harper 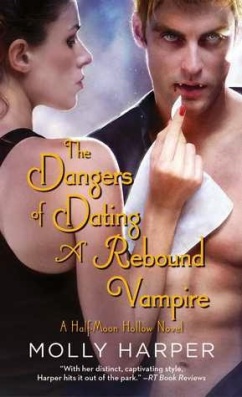 As an aside, I think this cover is atrocious.

This is Molly Harper’s 3rd book in her Half Moon Hollow series (the spin off from her Jane Jameson series), and there’s a nice Christmas novella to reconnect us to this tale’s heroine since the previous full length-novel didn’t feature her at all. Upfront, I really adore Molly Harper because of the way she handles female relationships with characters other than the hero, and their general quirky, feisty, no holds barred personalities.

The sensible beige pantsuit was mocking me.

It was hanging there, in my closet, all tailored and boring. And beige. Yes, wear me to work, and let all of your new coworkers know that you have no personality! It jeered at me. Look at you, all nervous and twitchy. Why don’t you just stay home and work for the Apple store, you big baby?

“That is one judgmental pantsuit.”

I do so love Molly Harper’s heroines. They are the snarky voice inside of my head just dying to get out. They are the girlfriends I have, and the girlfriends I wish to have. Granted, I don’t live in an alternate reality where at the turn of the century an accountant who has become undead sues for equal rights under the ADA (really, if you haven’t already read these series, what are you waiting for?) resulting in the mass outing of the undead population. But based on these ladies, I kind of wish I did. All that being said, I was rather disappointed by Gigi. The too stupid to live meter pinged almost off the scale for almost the first two thirds of the book. It basically comes right in the end, and I suppose I might have been asking for too much from a 20 year old, but still. Don’t be surprised by the New Adult flavor.

Gigi Scanlon is all grown-up, kind of. She’s finishing up with college and all set to embark on a career that her sister is sure to despise, by taking an internship with the Council for the Equal Treatment of the Undead. She’s also got vampire problems of the non-employment related variety. A seriously hot vampire is out to kiss her, or kill her. Don’t worry too much about him; he’s really just place holder fantasy vampire man with little else going on. Really it’s a jumbled mess when it comes to that relationship. Witches, and vampires, and computer programmers oh my. But, Gigi’s sneaky, and snarky, and pretty effing funny. There’s plenty of undead shenanigans, a nice twist of a mystery, and a pretty satisfying conclusion to a “nice-guying” situation.

This wasn’t the best or most satisfying book in either of the two series, but it was an enjoyable enough way to pass a few hours. And it opened up the future for some really entertaining undead shenanigans. I’ve got just a few words for you: See Dick and Jane legislate!

3 thoughts on “Review – The Dangers of Dating a Rebound Vampire”