The Liar
by Nora Roberts 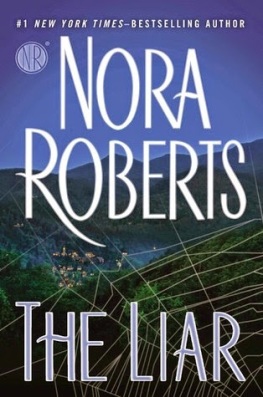 Shelby Foxworth lost her husband. Then she lost her illusions …
The man who took her from Tennessee to an exclusive Philadelphia suburb left her in crippling debt. He was an adulterer and a liar, and when Shelby tracks down his safe-deposit box, she finds multiple IDs. The man she loved wasn’t just dead. He never really existed.
Shelby takes her three-year-old daughter and heads south to seek comfort in her hometown, where she meets someone new: Griff Lott, a successful contractor. But her husband had secrets she has yet to discover. Even in this small town, surrounded by loved ones, danger is closer than she knows—and threatens Griff, as well. And an attempted murder is only the beginning …

This year’s offering is a family saga/drama as much as it is romantic suspense. Shelby returns home to Tennessee after her husband’s death. It turns out her husband was a miserable excuse for a human being and she is absolutely better off without him, no matter how much debt he left her in with his death. Her daughter is more than a plot moppet in this story, and she was a cutie pie. Griff, the love interest is the Mary Poppins of romance heroes.  There are also a host of other family members and friends who are integral to the storyline. I enjoyed reading about these people and their lives. What broke down for me a bit was the suspense, I had figured out all the plot twists before a quarter of the book was through. So while I enjoyed the journey, the book failed a bit on the suspense level. There were quite a number of twists though, so I am not going to heavily into the plot because that could possibly spoil it for the handful of people who might just be surprised. What i will say is that it was a nice cozy book that was easy to get into, with likable characters, and a plot that seemed relatively believable.

Overall I am rating this 4 stars, but read it for the characters and the journey, not for the suspense, unless of course you have never read a Nora Roberts romantic suspense book, only then would you possibly be surprised.

One thought on “Review – The Liar by Nora Roberts”