Beyond Innocence
By Kit Rocha

For years, Jared has existed on the fringes of both Eden society and Dallas O’Kane’s Sector Four gang. He travels between these worlds, protected by his money and power–money he earned selling his body, and power that comes from knowing secrets. He’s untouchable—until he starts a new life gathering intelligence for the O’Kanes.
Lili Fleming walked out of Sector Five with a gun, the bloodstained clothes on her back, and an icy determination to survive. She finds herself in a world where people live hard and love harder, and nothing’s more terrifying than how much the O’Kanes wake her up, make her feel—especially Jared.
Emotion is a risk he can’t afford, and a complication she doesn’t need. But neither can resist the lust simmering between them, and the sparks that could either melt the ice around both their hearts…or get them killed. Because the only thing more dangerous than loving an O’Kane is loving a spy.

This is book 6 in Kit Rocha’s sexy post apocalytic series. Previous books I’ve reviewed in this series include Beyond Shame, Beyond Control, Beyond Pain, Beyond Temptation, Beyond Jealousy, Beyond Solitude, Beyond Addiction, and Beyond Possession. Needless to say, once I found them, I inhaled them. We’ve got a couple of giveaways here, and then my review.


From the author:a Rafflecopter giveaway

And from me, via the author(s), This giveaway is open internationally for anyone who is 18 and over and you can enter using the Rafflecopter form below. The giveaway ends on the 28th of May and the winner will be announced soon afterwards. The prize will be sent out directly by Kit Rocha or her assistant so by entering you are giving me permission to share your email address. Feel free to enter both: 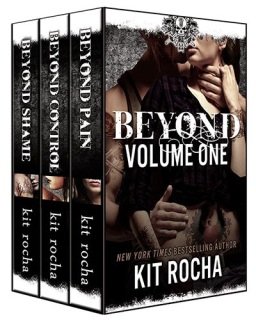 I received an ARC of this book from the author, this does not affect my opinion of this book or the contents of my review.

I really adore this series. For what is most certainly erotica, Kit Rocha has developed a richly nuanced post-apocalyptic dystopian world, somewhat reminiscent of the Hunger Games only with no grand games, and adults instead of children. And while the world is rather detailed, and the politics are interesting, it is the people who are the heart of these stories. And while old favorite characters are scattered throughout and take up prominent portions of the story, it is because they are integral to the story, it is because the O’Kane’s individually and as a whole ARE the story. The characters wouldn’t be the people they are without the relationships. It never feels as though they’ve been thrown in to keep fans happy seeing beloved characters, as happens too often in series.

Lili and Jared are probably the most damaged and interesting characters yet. And somehow, Lilli is the most out of place heroine as well. But she changes and grows, and makes a spot for herself that is uniquely her own.

Lili’s world tilted oddly, then settled while her mind continued to spin. Every time she was convinced she’d mapped out the boundaries of what her new life could be, an offhand comment shoved them outward again. Women could distill liquor and brew beer. Women could run businesses and have trades. Women could fight for money.
She didn’t know if she wanted to do any of those things… But now she knew she could.

“The first time you kissed me, I felt like the desert, and you were the rain. So much rain, I thought you’d wash me away. But, I’m not the desert, I’m the flowers.”

Of course this wouldn’t be a book about the sectors and the O’Kane’s without drama and intrigue, and Jared provides this in spades. The political machinations are really speeding up toward a large confrontation. And Lili provides a giant piece of the puzzle.

She wasn’t the desert or the flowers. She was a g——m diamond, formed under terrible pressure, as hard as the rock Logan had put on her finger.
And she’d cut the f—k out of anyone who didn’t get out of her way.

Beyond Innocence was sweet, tender, and raunchy, everything I’ve come to expect from this series. So now we’re set up for some real conflict in the next books, and a possible endgame is in sight. The next book should be coming out this winter and I can hardly wait. 4.5 stars

21 thoughts on “ARC Review & Giveaways – Beyond Innocence by Kit Rocha”