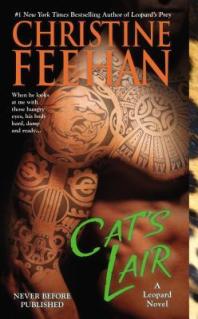 The #1 New York Times bestselling author of Leopard’s Prey returns to the feral underworld of her astonishing Leopard novels in an arousing new romance of forbidden animal instincts…
Cat Benoit has finally escaped the past—and the man who was the source of her nightmares. She’s off the grid, underground but watchful, and creating a new life for herself in Texas, far from the torrid dangers of her native New Orleans. She’s safe. He’ll never find her this time. Cat has to believe that. It’s the only thing keeping her sane.
Yet she can’t escape the attention of Ridley Cromer, the instructor at the martial arts dojo where Cat takes lessons. She arouses the animal in Ridley—and something feral comes to life when their body heat rises. Cat is in no position to let her guard down with anyone, especially someone who could be endangered by her past. But Ridley has secrets of his own—secrets only Cat would understand. If she dares to trust him..

Do you hear that shriek? That’s the sound of being completely irked because you want to quit a series, but you’re still waiting for one particular character’s story.
Honestly, why do I do this to myself? It is usually not a good sign when you almost dread starting a book and when you keep putting that book off. But I really did enjoy Wild Rain, Burning Wild and Savage Nature, so I figured (hoped) I’d settle in after I started reading.

Maybe my reticence in reading this one, and my opinion of this book was colored by my opinion of Viper Game? Maybe it was that the character wasn’t the one I was anticipating? (Small spoiler, it isn’t Elijah Lospostos.) Whatever it was, I couldn’t really get into this story. Were previous heroines as insipid and fawning as Catarina? I don’t think they were, but now I fear going back and rereading them and not enjoying them anymore.

This book was literally more than half navel gazing on the parts of both Cat and Eli. Both before she found out he betrayed her and she didn’t know who he really was, and afterward. And what wasn’t naval gazing was some serious control freak stuff. Feehan has always edged into non-con, but this particular story wasn’t just excessive dominance, it seemed more coercive and controlling to the point of being abusive. Cat never had her own foundation to stand on, and Eli did very little, except teaching her self-defense, to help her with that. It felt very Stockholm like, and I think the issue here is that this series has slid way over to the Twilight/50 Shades side when it comes to characterization and storytelling. Did E.L James work on this? I couldn’t respect Cat, I could only pity her. She went from the hands of one sociopathic controlling monster, to one who merely wasn’t a sociopath. But she was still a fairly blank slate and he trained and groomed her to be whom and what he wanted her to be. I mean that quite specifically, Eli literally thinks how lucky he is that no man has ever had her and that he can mold her into what he wants and needs. I found Eli fairly monstrous and nothing about his interactions did anything to make me see him in a different light. Part of the problem was the aforementioned navel gazing. Since there wasn’t actually any plot, there wasn’t anything for us to really see. Being in his head thinking how much he loved and needed her didn’t help. This was all tell, no show, and irritating. It was very irritating. We never even really saw her training in self-defense, we were just told she did so.

What little development we saw of her as a person at the start was completely eclipsed by Eli when he first kidnapped her. She thinks of nothing but him. Not her friends, not her future. It is just the now and how Eli is shaping her.

I can sum this book up with a few simple words:

Sadly, this had the bones to be a fairly decent book. The first few chapters (asides from a bit too much naval gazing), a few interspersed spots in the middle, and then the last couple of chapters were fairly good. But either about 200 pages needed to be cut out, or completely rewritten to make it tolerable. I am assuming Feehan is chasing the 50 Shades crowd, which isn’t surprising since she has always trended that direction. But for me at least, in doing so, she has lost the things that made me enjoy her works.

Really, at this point I have to ask myself more seriously, why do I keep doing this to myself? I have an enormous TBR shelf of things that don’t fill me with dread. There innumerable books out there that I am sure to enjoy. I don’t enjoy reading things I dislike. I don’t enjoy leaving negative reviews. My goal isn’t to excoriate anyone or anything. I don’t enjoy wasting my time or my money as those are scarce resources. Probably the only reasonable answer is that I am a sucker and I am not a quitter and I have significant difficulty dealing with lack of closure. I don’t hold out much hope for Elijah’s book, but I’ll likely read that too, hoping I can finally let go.

If you enjoyed this review please consider “liking” it on Amazon or Goodreads.