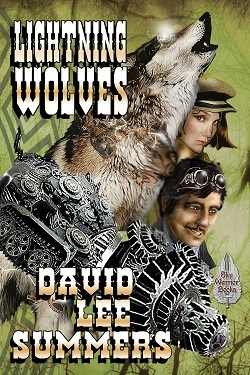 I received a copy of this book from the author, via Amazon, this does not affect my opinion of this book or the content of my review. Additionally, I do not “know” the author, nor do I have any type of personal relationship with him.

This book started off promisingly enough, with a dream about the war. No, not the civil war, a war between the United States and Russia in an alternate history where steam rules and fantastical engineering feats are accomplished, and where a shadowy entity known as The Legion runs amuck in society, politics and war. It turns out this is actually the second story in the series, but overall I’d say the author does a fair job of updating the reader on events so that this can be read as a stand-alone.

However, can and should are two very different things. And right after checking in with the main protagonists we start cutting away to other characters who are obviously and pointedly the main protagonists of the first book. I’ll admit, it took me out of the story a bit and I struggled to care a whit for them. Maybe I am a bit too ADHD, but I have trouble focusing on more than  a small handful of unknown characters at a time.

But, back to the two I consider the main characters in this book. One is Larissa Crimson, a bounty hunter and war hero living under an assumed name. She should have been right up my alley, a wild west feminist interested in science and engineering, Yes, that should have been my catnip. What got in the way of that, is before I even got to know her as she is, we started getting dreams of her childhood. The other is Professor Maravilla. He’s a steam punk mad scientist and a naturalist with a penchant for talking to himself, and he too is living under an assumed name And then a little later we are introduced to the third main character, Sergeant Michael Harris. He’s the one who ties the characters from the previous story back into the current one.

As for the story itself, the first part seems like a McGuffin. The professor and Larissa are searching for the answer to a camel carrying a skeleton which is spooking people off from an area. The mystery is eventually solved, but initially the only purpose I could see for it was to give the professor and Larissa a reason to be difficult to find. It turns out that isn’t the case, it was a lesson characters needed to learn. There were several other plot lines that all eventually converged. There was excitement and drama, and of course fantastical steam punk elements.

So I suppose this all makes it sound as though I didn’t like it, when that couldn’t be further from the truth. There was much of it I enjoyed tremendously, it is just those parts are hard to explain without getting into spoiler territory. Legion is absolutely fascinating, and by the end of the book I did come to care about the characters. While a few elements could stand to be tightened up, it was, all in all, a very entertaining book that kept me engage for the afternoon I read it. 3.5 stars