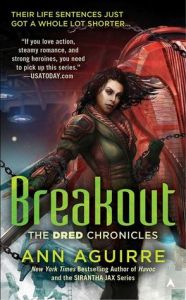 The prison ship Perdition has become a post-battle charnel house with only a handful of Dred’s soldiers still standing and now being hunted by Silence’s trained tongueless assassins. Forging an uneasy alliance with mercenary commander Vost—who is their only chance at escape—the Dread Queen will do whatever it takes to end her life sentence on Perdition and keep the survivors alive long enough to cobble together a transport capable of getting them off station.

If Dred and her crew can win the deadly game of cat and mouse, the payoff is not only life but freedom—a prize sweeter than their wildest dreams. Yet the sadistic Silence would rather destroy Perdition than let a single soul slip from her grasp…

Seriously, look at that cover and that blurb, and my love for the other books in this series. I so wish I could have taken the day off work to read this, but alas, that wasn’t an option and I had to wait. This is the sort of book that really irks me about Tuesday release days. Seriously, Saturdays or Sundays would suit me much better.

But back to the book. There may be spoilers for at least the previous books, so stop here if you haven’t read them yet. I’ll try not to spoil anything since this is worth the ride, but no promises.

The intrepid band of murderers have just made an unholy alliance with the remaining mercenaries who were sent to kill them all. That unfortunately leaves Silence and her acolytes to deal with, no easy task, and then things go from bad to worse.

Seriously, the hard hits just keep coming at our crew, and the plot twists strike like lightening out of no where. It is a rush and I kept finding myself leaning forward like somehow my forward momentum would push me thorough it faster. It was literally painful to see what some of the characters went through, and to get into some of their back stories. Literally painful, heartbreaking even, and I am telling you again, Aguirre has some sort of magic to make the readers care so about murderers. And character growth enough to make you weep. Not too long ago I was reading a post about genre fiction vs literary fiction, and if you can read this series and not see how the characters grow, how their ideals change, and if you can’t feel the emotions just pouring off the page, then I sincerely doubt your ability to actually read or to learn anything from any sort of fiction. It isn’t highbrow, I doubt anyone but me (well and other science fiction fans) would consider it “literary” whatever the hell that means. But it is the kind of thing that puts you right there and makes you question yourself. What if? What if that were me, what if I were in that position. I’ll take my social commentary, political criticism, and focus on an individual to explore parts of the human condition, wrapped up in a shiny and gritty (yes I think it can be both) science fiction package thank you very much. Moments of emotional truth indeed.

Something else that was pleasing was an additional minor tie-ins to the Sirantha Jax series. Since I have read those I can’t gauge the impact on someone who hasn’t read them, but for me it made one of the characters just that little bit more poignant. I can imagine that if you haven’t read the other series it would seem bland, but since it is a very small part of this story, don’t feel you have to read that series, though I sincerely recommend it.

The first three quarters of the story were full of adrenaline fueled action that further honed our main characters. The last quarter was almost like an extended epilogue. I can imagine that some people might find that slightly irksome, but personally, I couldn’t have been more thrilled. If there was one complaint that I had about the Sirantha Jax series it was that the series cut off when the main action was resolved. I understand that Aguirre purposefully set it up to let Sirantha live the rest of her life off page, but it was a bit disappointing for me at least. I like the slow down and the look inside the calm, it feels like the book version of aftercare, and I missed it. But Breakout provided it spades, and I found that infinitely more satisfying than more action packed adventure. Things were neatly tied and comfortable by the end of it. Not everyone got happy endings, but I think everyone got the right endings.

In the end, for me, there was only one wrong note. A cameo that kind of made me cringe slightly, because the timeline of the story made me unhappy with how other events must have shaped up, so it was unsatisfying rather than the boon I was sure it was meant to be. Honestly though, that is just sour grapes on my part. And it made me realize how much I honestly like, respect and prefer Jael and Dred than them, so at least that clarified it for me. If that seems overly cryptic, well you’ll just have to read both series to see what I mean.

Despite that one false note though, I was completely satisfied. I unreservedly recommend this series to science fiction fans, particularly ones who like the gritty and emotional with a heaping helping of romance and ones who enjoy the after care of an emotionally gripping story. I am giving this entry 5 stars and suggesting reading this series all at once like one epic book, I think it is more satisfying that way then splitting it out and thinking of each book as a separate thing, because Havoc FEELS like the middle of a book. And since the flavor of each of the books is different due to changes in the characters, this isn’t likely to burn you out like gloms of some series tend to.