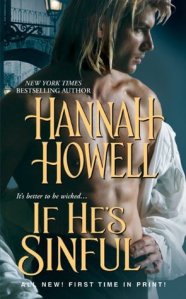 It is whispered throughout London that the members of the Wherlocke family are possessed of certain unexplainable gifts. But Lord Ashton Radmoor is skeptical – until he finds an innocent beauty lying drugged and helpless in the bedroom of a brothel.

The mystery woman is Penelope Wherlock, and her special gift of sight is leading her deep into a dangerous world of treachery and betrayal. Ashton knows he should forget her, yet he’s drawn deeper into the vortex of her life, determined to keep her safe. But Penelope is no ordinary woman, and she’s never met the man strong enough to contend with her unusual abilities. Until now…

Crackiness of this zany paranormal family or not, I am going ton find myself very frustrated if the main thrust of relationship conflict in every book is that the hero is entangled with the most evil woman on the planet. Very frustrated indeed.

At least in this case the hero isn’t married, and the engagement wasn’t entirely his own doing and he actively seeks to fix the situation. That was enough for me to not feel quite as frustrated with this one as I was with the last one. But just barely.

Despite their rather bizarre meeting, and some touchy actions by the hero at the start, throughout the story I really came to like and admire the hero, and Penelope was kind of awesome from start to finish. And putting two characters you can legitimately like in such a crazy over the top situation, surrounded by mysteries and intrigues, it is just my sort of catnip.

The mystery itself was multi-faceted and with enough twists and turns to make it a satisfying romp even though you could see those turns coming from a mile away. For me at least the joy is in the close-knit family and all their crazy antics and “gifts”. I can’t really explain it, but there is something I just love about settling in with a whole clan of eccentrics and seeing what they’ll do next. The romance itself didn’t blow me away, but for something like this, so long as it doesn’t disappoint me, that is more than enough to see me pleased.

I think it is fair to say there are also a fairly large number of plot holes that wouldn’t stand up to close scrutiny. But that is ok, this isn’t a close scrutiny sort of book. For me, this sort of thing is pure escapism, and this was a very pleasant escape for a few hours. I am uncertain how many of these I’ll be able to read in a row, but I’ll just have to keep reading to see.

4 thoughts on “Review – If He’s Sinful by Hannah Howell”