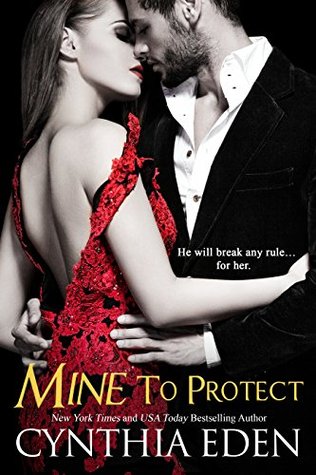 He agreed to protect her…not love her.

Victor Monroe left behind a brutal past when he decided to become an FBI Agent. He knows that other agents think he’s too cold, that he has ice in his veins, but he doesn’t care what folks say about him. He gets the job done–always. No matter the cost.

Then he’s blackmailed into guarding…her.

Zoe Peters, ex-showgirl, daughter of a mob boss and drug dealer, a witness who wants to vanish. Zoe is wild, beautiful, and on far too many hit lists. It’s now Victor’s job to keep her safe–a job that Zoe makes damn difficult. But keeping her alive is his mission. It’s supposed to be strictly professional between them. Just another case. Only…

He never counted on falling for her.

Zoe is not the woman he expected. She isn’t cold or hard. She lights up the room when she walks into it, and despite the hell surrounding her, Zoe is good. Probably too good for Victor because Zoe doesn’t know about the secret deal that Victor worked out with her father. Zoe doesn’t know that Victor intended to use her for information and then turn her over to waiting operatives.

Desire wasn’t supposed to enter the equation. The white-hot lust he feels for Zoe should have never threatened Victor’s legendary self-control. But she’s under his skin…melting his ice…getting to him… Soon Victor doesn’t care about the law or about the lines he has to cross for Zoe. She is his priority. Victor will not rest until every threat to her has been eliminated. And then…

Zoe will be his.

I have been waiting for Victor’s book for what seems like forever. He actually crosses between Eden’s Mine series and her Dark Obsession series. As I have said most of these could be read as stand-alones but really, this is sort of a saga of the most villain-beleaguered group of friends and family you will  ever read. Just action packed soap opera and Victor seemed set to be the crowning touch as he’d previously stole the show.

Turns out he’s an effing snake in the effing grass. I could hardly believe it. Sure, he was conflicted about it and all, but he sure wasn’t clearing his mess up any time soon.

Zoe on the other hand, she absolutely rocks, she’s as one character put it, “one hell of a woman”. Kind, compassionate, moral, and a spitfire who rescues herself and others. Probably she’s one of my favorite Cynthia Eden heroines in a while.

Victor though, he’s a snake in the grass almost to the very end. The mystery was nice and twisty though, the story was action packed, and the chemistry between the two of them was fairly combustible. And it was really nice to get updated on some of my old favorite characters. Life is peachy for this villain beleaguered group, and it was lovely to see. It also prompted a re-read so that was nice to.

All in all, I enjoyed it, it wasn’t my absolute favorite in the series, I think I might have built Victor up a little too much. But it was a solid story and a good entertaining read.

2 thoughts on “Review – Mine to Protect by Cynthia Eden”