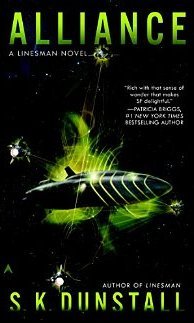 The lines. The soul of every ship. It was once thought there were only ten, but that was before an alien vessel appeared at the edge of space—before Ean Lambert heard more lines singing. Ean’s ways of communicating with lines is strange. But his abilities make him a valuable tool—or weapon—to command.

Captain Selma Kari Wang has lost everything—her ship, her crew, her legs. But the New Alliance of Worlds is not done with her yet. After they rebuild her broken body, they send her to captain one of the new alien ships, teaming her up with Ean, the only one who can understand the alien lines.

Kari Wang and Ean are poised on the threshold of discoveries that could change the world. But not everyone wants the New Alliance to control the secrets they uncover—and those who oppose won’t hesitate to do whatever it takes to stop them…

Linesman (much like Dark Horse) was a breakout surprise for me last year. It just blew me away and I can’t count how many times I have re-read it since. So seeing the next one on Amazon was an immediate pre-order.

I jumped in as soon as I got home from work, and I was quite surprised we didn’t start with Ean Lambert. All of the last book was from his perspective, so I just wasn’t ready for Captain Selma Kari Wang. Fortunately she completely rocks, a completely in charge woman, and it was a hell of an introduction. Any doubts I might have had about how Dunstall would write from a female perspective were immediately dispelled.

As for the main action, we get right back to Ean and the New Alliance quickly, the action is exciting, Ean’s self deprecating charm is still a hit, and the politics are still simply fascinating. Seriously, I can not quite come up with the words to express how fascinating the political parts are, but it is one of my favorite aspects of this series. And the lines and the way Dunstall is building them and the linesman are a close tie for interest.

When we head back to Kari though, it is a gut punch, and I am highly impressed with how the author was able to weave such an emotional connection between the reader and this woman in such few words. While Ean was a man who needed to grow, Kari is a woman broken down to nothing who rebuilds herself…despite herself.

Secondary characters are also coming into their own fleshing out an already interesting world. It will be interesting to see how the Eleven’s crew shakes out, some of them are a delight

The only thing I didn’t like about this book was the ending. Nothing negative, and no cliffhanger, it just came to a conclusion rather than a climax. But I can live with it, and I am in fact giving it 5 stars. I an hoping desperately Dunstall can keep creating at this rate.