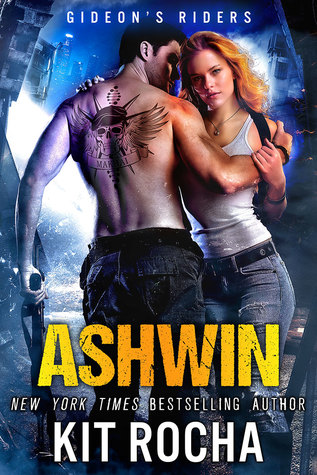 Lieutenant Ashwin Malhotra is a Makhai soldier–genetically engineered to be cold, ruthless. Unfeeling. His commanding officers consider him the perfect operative, and they’re right. Now, he has a simple mission: to infiltrate Gideon’s Riders, the infamous sect of holy warriors that protects the people of Sector One.

He’s never failed to execute an objective, but there’s one thing he didn’t anticipate–running into Dr. Kora Bellamy, the only woman to ever break through his icy exterior.

When Kora fled her life as a military doctor for the Makhai Project, all she wanted was peace–a quiet life where she could heal the sick and injured. The royal Rios family welcomed her like a sister, but she could never forget Ashwin. His sudden reappearance is a second chance–if she can manage to touch his heart.

When the simmering tension between them finally ignites, Kora doesn’t realize she’s playing with fire. Because she’s not just falling in love with a man who may not be able to love her back. Ashwin has too many secrets–and one of them could destroy her.

I received an ARC of this book from the author, this does not affect my opinion of this book or the content of my review.

Do you know what I have been missing in my reading life? Legitimate joy. Joy which I finally found again. I have been waiting for this man’s book since his very first appearance. He is all kinds of chilly and just my kind of damaged hero catnip. Seriously, I referred to him in my last review as “my cuddly wuddly little Maiko shark“. I am not saying there is nothing wrong with me, I am just saying that Ashwin is one stone cold heart-breaker in the best of ways. If you are a fan of Nalini Singh’s Judd, Kaleb, or Vasic, this will be right up your alley too. He’s colder and more pragmatic like Kaleb, but dropped into the emotional and caring culture like Judd was, with a little more depth like Vasic.

Now, this IS the start of the spinoff series, and I think you CAN read this one apart from the other series (though I think everyone who likes erotica should read the other series), but it does add a little something to it if you have read the other series. However, if the more in depth erotica-ness of the previous series wasn’t your cup of tea, then jump on in over here, because the water is nice and warn…but not too warm. No menages, no voyeurism, none of the overt BDSM elements, just good old fashioned super smexy times romance (but not boring smexy times either if you know what I mean).

So what is going on is this. The previous series chronicled the start through the end of the war in a post-apocalyptic dystopian. It was kind of like the Hunger Games in that there was a greedy capital that sucked the life out of the other sectors and pitted them against each other. Now we are seeing the rebuilding phase of this world. Basically that is all you HAVE to get from the previous series, though Kora and Ashwin were minor albeit integral characters in the other series.

It has been 6 months since the end of the war. Kora had left her cushy but emotionally unfulfilling life in the capital to work as a doctor in the Sectors. Her and Ashwin were parted at the end of the last series and Kora has grieved for Ashwin while she has been working in Sector One. When he pops back up it was, needless to say, quite the shock. And it hasn’t exactly been the most fun 6 months of Ashwin’s life either. Ashwin is there to join up with the Riders, the protectors in the religion that Sector One had come up with and what has turned into the stabilizing new force in the post war culture. Sector Four’s irreverant devli may care attitude was enough to push for and win the war, but what is needed now is more a culture of home and family and peace. This naturally causes some consternation in what is left of the capital, and decisions have been made to monitor and perhaps influence the growing power. So there are intrigues and conspiracies, and the left over power structures in the capital aren’t as neatly severed as one might like. And we can definitely start to see where the future conflicts are going to come from in the world at large.

As far as relationship conflicts go though, this one was kind of a doozy, and Ashwin screwed up royally. Can I blame him? Not exactly, because there is a ton of subtext and personal past history going on, but then, I am not the one he screwed over either.

Dude, I am screwing this review up though, because all I want to do is squee and gush over the entire plotline…which would completely spoil things. So I will just say that I LOVED it. I loved how Kora has plans and hopes and dreams for herself separate from any man-and that she has plans to continue her path even with Ashwin in her life. I love how she gets MAD. I loved Ashwin, from cold and hard to emotional as he changes and grows; and I want to see more of that arc in future books. And I loved how they were together. They were sexy and sweet and they fought and made up, and they knew that it would be building a family, that their relationship would take work. And they are all in on making it work.

I have actually re-read this one already, and foresee rereading this many happy times in the future. So seriously, buy the book, here are the links; I am not an affiliate I just really want people to buy and read it.