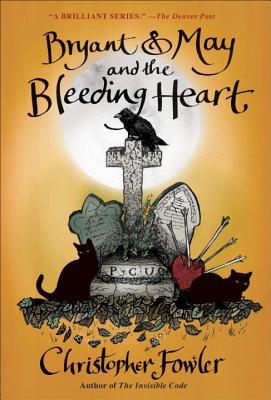 Usually, I am not one to pick up a book by an unfamiliar author unless someone I trust recommends them. I took a leap of faith this week and checked out Christopher Fowler’s Bleeding Heart, after the local librarian suggested it. I could not be happier with her recommendation! Fowler has quite the bibliography under his belt with several standalone novels and a long running series centered on a specialized detective unit in London. The PCU, or Peculiar Crimes Unit, helps to protect the citizen of London from crimes, which may otherwise cause fright or distress. There is a team of investigators that handle these crimes, usually unbeknownst to the majority of Londoners.

Bryant & May and the Bleeding Heart is the eleventh or twelfth installment in Fowler’s Bryant & May series. I could not find where this distinction was mentioned, but after looking at Fowler’s website, I realized it had not been updated with this title. Even though I had no previous knowledge about Detectives Bryant and May, I did not feel lost picking up this late in the sequence. At various points throughout the story, there were hints and minor remarks made to events I can only assume took place in the earlier books, but it did not affect this specific storyline. The investigative nature of this plot gave many opportunities to understand the inner workings of the detectives’ thought processes. Bryant is a little unconventional and often looks outside the box during the investigation. These alternative methods included trips to see a self-proclaimed witch and a magician, amongst other adventures. He also consults bizarre books that date back centuries to find connections to this modern crime. May, on the other hand, is more of a “by the book” detective who doesn’t give much credence to the dark arts and mythologies. He is an anchor of sorts for Bryant and helps to keep him out of trouble with the higher-ups. These old-timers are sticking together to make their way in a changing city, the only way they know how.

Fowler is very skilled in his character development, without being drawn out or excessively wordy. A great many number of conclusions can be made based solely on the features of an individual’s appearance, their home space or even working environment. These nuisances truly connect the reader with the characters. If I can get my hands on some of the earlier installments, I would love to see how the main characters have evolved from the beginning up until this current title.

All in all, if asked if I would recommend this title it would be a hands down yes. The only draw back that I experienced were the differences between American and English English. Some of the spellings, phrases and terminology threw me, but after a few chapters it wasn’t as noticeable. So, grab a cuppa and check out Bryant and May!