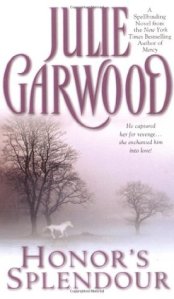 Honor’s Splendour was probably the very last Julie Garwood historical I picked up. I think it must have been due to the blurb. Something about it didn’t appeal to me. But once I got into it, I rated it as highly as any of my other Garwood favorites. And then it fell off my re-reads radar for some reason. But once I started cleaning up my library for the switch to a Kindle Paperwhite, I just had to re-read it.

Honor’s Splendour is available at OpenLibrary, but since I read my personal copy I can’t verify the quality of the scan.

Now on to the review:

The first thing I want to note is that there is one gay character, and he is the villain and painted as a repugnant individual. I know that this (rightfully so) bothers many people, so I figured I would get that information out of the way first. However, it isn’t harped on, and his sexuality isn’t really the source or a component of his villainy, so I was able to get past that part.

The second is that a main character was raped. That isn’t precisely a staple of Garwood’s, in fact to my recollection this is the first and last time she’s used this plot. So I would rather readers not be surprised. It is not described and happened prior to the story’s beginning.

Ok, those notes out of the way, this is a really sweet story. The thing everyone harps on and sighs over, and rightfully so, is the opening scene. Madelyne steals everyone’s heart, including our erstwhile hero’s, when she risks her brother’s wrath to rescue him, and then warms his frozen feet on her bare stomach. It is one of the best opening chapters of any historical romance that I can recollect. In Duncan and Madelyne we have what should be Garwood stock characters. Duncan who is gruff and alpha but unwillingly kind. Madelyne who is beautiful, compassionate, smart, and brave, but thinks she isn’t. All the usual fare. And yet, these two are more than the sum of their parts. Duncan is so befuddled and sweet as he cares for Madelyne after an injury (and terribly adorable as he lies to himself about his own motives), and kind when he sets Madelyne to caring for his sister. And Madelyne has her own cute quirk, an obsession with Greek history and legend, in particular Odysseus.

There is mystery, intrigue, falling in love (times two in this case), and the villain gets his comeuppance. So if you can get through the hard parts, it is a really lovely tale, and well worth the read. 4.5 stars