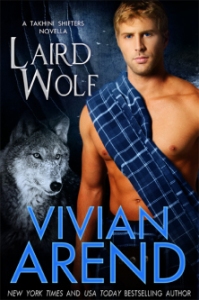 I received an ARC of this book from the author, this does not affect my opinion of this book or the content of my review.

This is the second book in the Takhini Shifters series which is a spin off from the Takhini Wolves series. The first story in this series, Copper King, was one of the earliest things I reviewed. I liked that story a lot, but my reviewing certainly didn’t do it justice, so I hope I can do better this time. Plus, this time we have fabulous prizes. There’s a massive tour wide contest with plenty of excellent prizes, and a second contest where you can win a copy of Copper King.

Vivian is giving away one 6” Kindle, along with an assortment of shifter books, AND a wolfie in a kilt!
a Rafflecopter giveaway

And to enter to win the digital copy of Copper King, just comment on the blog, either about this story, your favorite Vivian Arend book, or anything at all. Just comment and I’ll randomly draw a winner!

Now, on to the blurb and the review!

He’s a wolf in a kilt. That pretty much says it all…

Pulling off a rescue mission at a remote castle in Scotland should be an easy task for lone wolf Damon Black. He’ll flash some muscle, show a little Alpha power, and do whatever it takes to ease Addie MacShay’s fears. But the woman who throws herself into his arms and cries boyfriend is more intriguing than anticipated. The sexy she-wolf’s got more curves, more tantalizing scent, more of everything he desires.

Addie’s job cataloguing an estate at the Sterling-Wylde Manor is complicated by the ongoing discovery of new wills and the two creepy heirs who won’t leave her alone. But her fake boyfriend turns out to be a far greater threat—not only is he fun and flirtatious, he looks delicious in a kilt. She craves his touch, but with her empathic skills on overdrive, touch is the last thing she needs.

Damon’s fighting his unruly inner beast. Addie’s fighting their incredible sexual pull. They’ll both have to lower their guard to make this more than a Highland fling.

Wolfie in a Kilt, really that says it all, and don’t worry, you find out exactly what (or rather what he doesn’t) have on under that kilt.

On a more serious note, Addie has a photographic memory and an inconvenient quirky legacy from her two Omega parents. When she gets into an uncomfortable situation during her job as an estate cataloger, her best friend (the heroine from Copper King) sends in the calvary. Damon is an unlikely sort of hero, because that is the last thing he ever wants to try to be again, but man does he rock a kilt.

Both of these characters have strong reasons for not wanting to get into a relationship, but the chemistry and personal enjoyment in each other is palpable. And what I really enjoyed with this particular pair, is it WAS NOT an issue of insta-mate. They found out they liked each other, could work together, and grew to love each other, all without their beasts input. That isn’t to say that I don’t enjoy a good insta-mate story, because I do, but that sort of connection just wouldn’t have worked for Addie and Damon.

So, if you think you’d enjoy a story where the heroine doesn’t go all naval gazing over the hero and can stomp him in chess without drooling over him or even interrupting her work day (but really knows how to work the evening, if you know what I mean), a hero who doesn’t get all bent out of shape when he gets stomped in chess by a woman – and knows how to have fun and rock a kilt, and if you didn’t know Highland Tigers are a real thing, then this may just be the perfect book for you.

(BTW, Highland Tigers are totally real, and my life is now complete because I know this. After you read the book check them out.)

About the Author: Vivian Arend in one word: Adventurous. In a sentence: Willing to try just about anything once. That wide-eyed attitude has taken her around North America, through parts of Europe, and into Central and South America, often with no running water. Her optimistic outlook also meant that when challenged to write a book, she gave it a shot, and discovered creating worlds to play in was nearly as addictive as traveling the real one.  Now a New York Times and USA Today bestselling author of both contemporary and paranormal stories, Vivian continues to explore, write and otherwise keep herself well entertained.

4 thoughts on “Review and Giveaways – Laird Wolf by Vivian Arend”