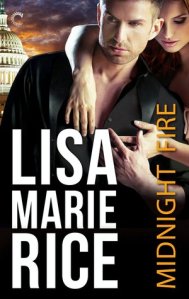 I received an ARC of this book from the Publisher, via Netgalley, this does not affect my opinion of this book or the content of my review.

Jack Delvaux is alive Summer Redding thought the blindingly handsome jock who’d loved and left her years ago had died in the Washington Massacre. She grieved for her lost golden boy as the rest of the country mourned their dead—until she comes home to find a very alive Jack Delvaux waiting for her with a devastating secret that turns her life upside down.

No longer the carefree man he was in his youth, this Jack is dark, hard and dangerous; a fifteen-year veteran of the CIA hungry for answers…and hungry for her. The rich, good-looking charmer who broke her heart once before would have been easy to resist, but this man, this powerful man? Summer needs him, and he knows it.

When Jack’s mission uncovers evidence of government involvement in the Massacre—and plans for another attack—he’s primed for revenge. But he has more than vengeance to live for now, and when Summer’s life is threatened, it’s nearly Jack’s undoing. Someone taking shots at his woman? That’s a dead man walking.

This is book 4 in the Men of Midnight series, and book 7 overall of interconnected characters. This author has a very repeatable format that I find really enjoyable and it is comforting for me to read. Man and woman hit deep into some over the top intrigue, close knot clan of former military operatives turned private sector close ranks, hero and heroine save each other (either metaphorically or physically), evil is vanquished, true love prevails, and happily ever is achieved. I don’t think Lisa Marie Rice is glommable, because it might get a little repetitive. But if you are looking for romantic suspense without the angst, she is a sure-fire winner.

Midnight Fire adds a new twist to her format, the second chance romance, so I was eager to check it out. I have a love hate relationship with second chance romances, so I really never know how I am going to respond, but I do tend to favor it in shorter romantic suspense because often you get insta-love in that type of story to make room for the action. So it feels kind of nice for the main characters to have some history together.

And man this heroine is rocking it. Not that previous heroines in the series haven’t been smart or together, especially the last one. But Summer is in a whole different league. She runs the biggest political expose blog and is tapped into all sorts of information. And it is that information and those contacts, as much as her previous relationship with Jack, that gets her sucked into this intrigue.

On the second chance front, Summer might have pined hard-core when he first broke her heart, but she got back out there and lived her own life, dated, created a career she loved, the whole shebang. Jack, while he might not have pined after he left her, admitted what an unthinking man-child he was back then, has been sad and lonely for a lot longer than just this past tragedy, and gets cutely gushy and open with Summer almost immediately as with the 20/20 hindsight he recognizes what he missed out on. It struck enough of a second chance balance for me to enjoy it,

And for those of you, who like me are on condom watch, while there isn’t explicit contraceptive use, there also weren’t any thoughts or conversations about being willing to risk it etc. So it was, I don’t know if better is the right word or just less irritating. I can handle characters who don’t even think about it better than I can characters who consciously make what I consider a stupid decision.

The suspense though, that was a mix of ripped from the headlines and over the top espionage CIA thriller movie-esque action. Think Live Free or Die Hard. There really isn’t any mystery, we even spend some time in the evil villain’s head. The question is just how is Rice going to shake this one out. But it was engrossing seeing how it all fell apart and came together. And I always enjoy it when the heroine saves the day.

Honestly, I found Midnight Fire to be a delightful little treat for rounding out my evening. A nice way to go through a second chance romance, especially for those of us who like a little Bruce Willis-esque action in our romance. And while the hero didn’t grovel, he got nicely gooey over the heroine in short order and did apologize.

One thought on “Review – Midnight Fire by Lisa Marie Rice”